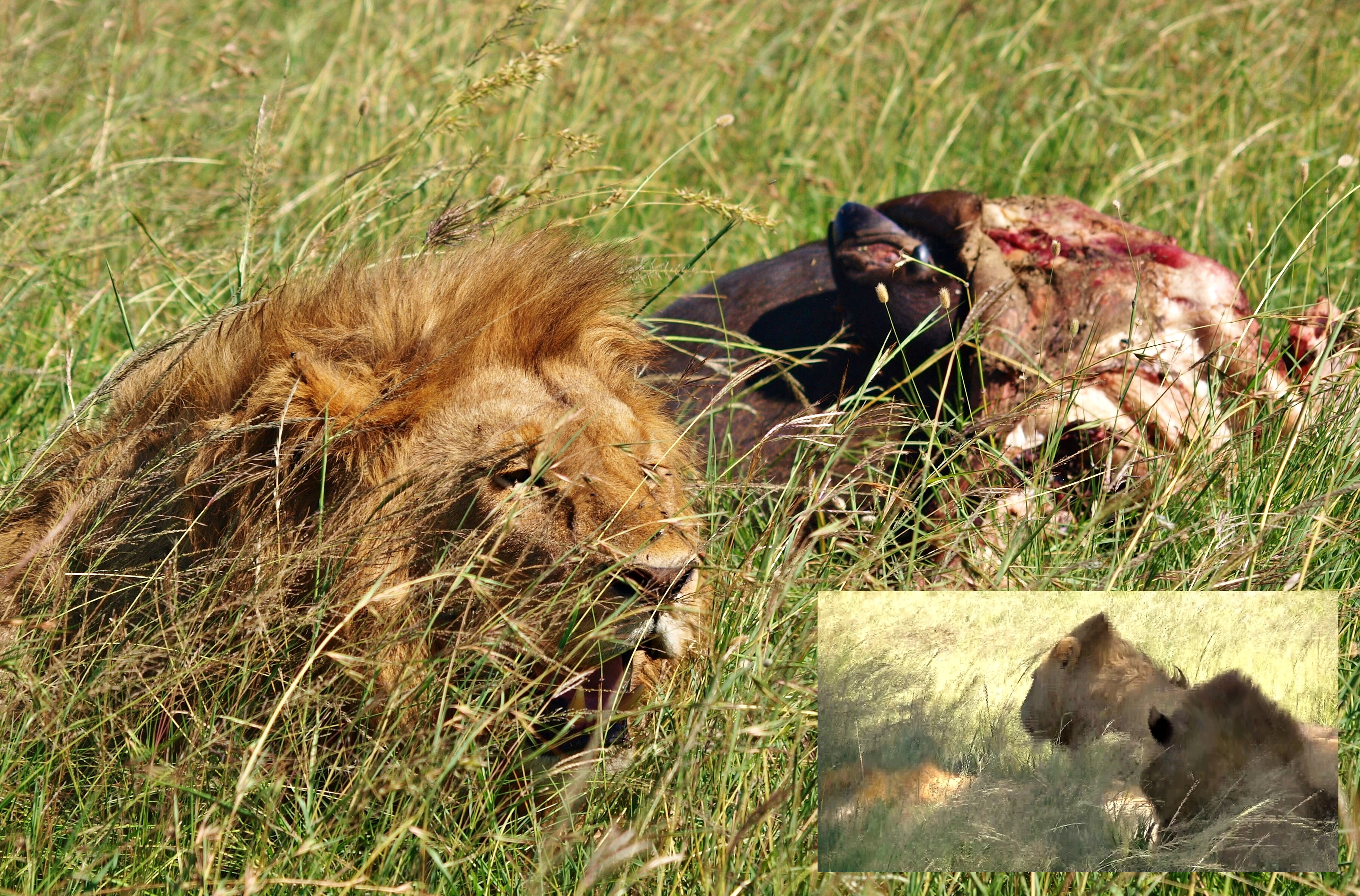 The bright orange carpet of the rising sun gradually covered the grassy savannah of the Masai Mara National Reserve in southern Kenya. Local residents – impalas, gazelles, topis, zebras, wildebeests (which according to some people look really strange) already started to eating breakfeast under us. We watched this show from a viewpoint, which was built high in the trees, where we also ate our breakfast. It was like an beautiful African dream!

In addition to a cook who has already prepared a tasty omelette on the plate, Edga was also with us there. Who is Edga? Edga was our guardian with a slingshot. His job wasn’t to protect us but our food. Green monkeys had a great appetite for our breakfast. Sorry but they had to find something others. I like omelette too.

Other day in Masai Mara National Reserve was ahead of us. The previous day completely surpassed all our expectations. We met a big herd of African buffaloes. 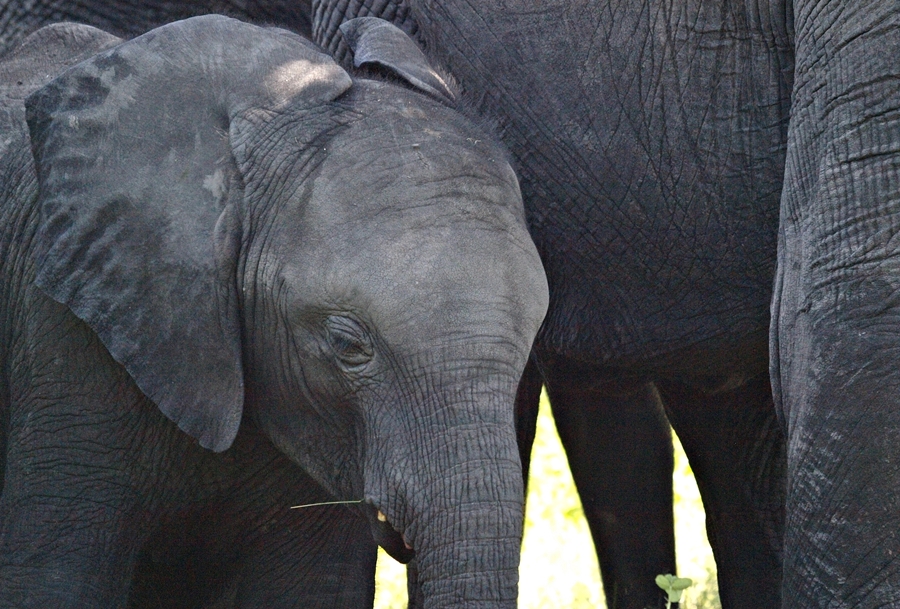 And the fastest mammal of the planet – the cheetah came to lie down under our car: 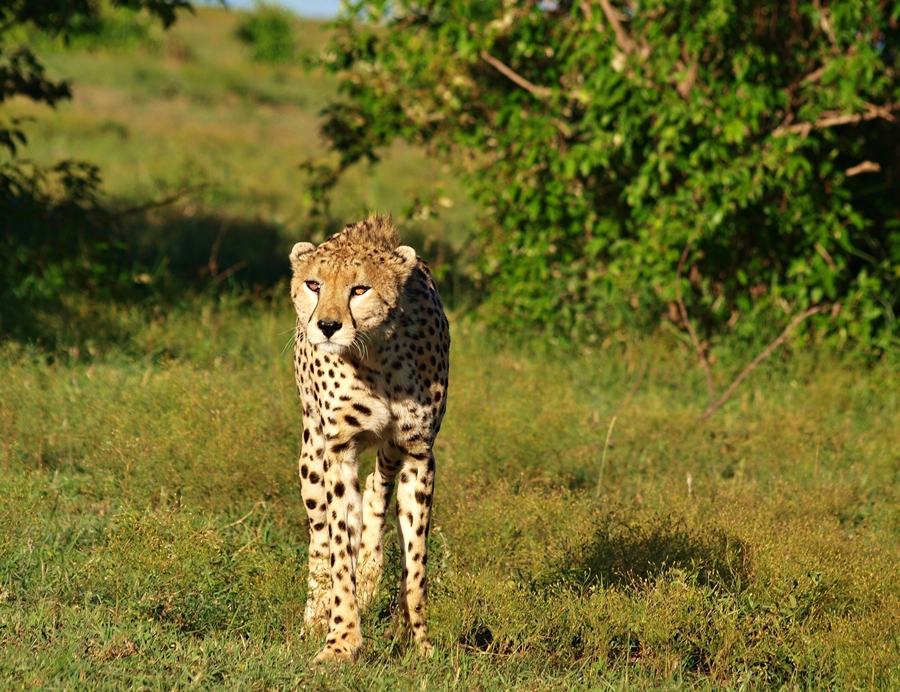 We rode between the herds of zebras, wildebeests, gazelles and many other species of antelope, including the second largest antelope in the world – the common eland that can weigh up to a ton:

We have been wondering what other amazing surprises Masai Mara had prepared for us. „I’d like to find ostriches. We saw them just from afar yesterday,“ said one of the clients. „I’d like to see such a strong male lion because we saw only female lions yesterday,“ continued other. And of course, everyone wanted to find a leopard that, in my opinion, is the most difficult wanted animal from so-called African Big Five. 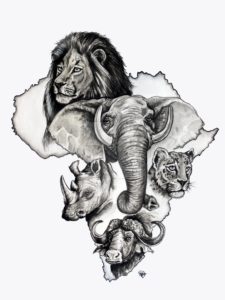 The Big Five is the naming of the five most dangerous animals in Africa, which were/are the most difficult to kill for hunters. This includes the lion, leopard, elephant, rhino and buffalo. Many people come to Africa with the goal to see this Big African Five.

We walked slowly to our safari car after very tasty breakfast in trees. We knew that this day will be not just about animals. The first planned stop was the village of local Masais – known warriors and cattle shepherds, who live in southern Kenya and northern Tanzania. After a few minutes, on the way to the village, we met other cheetah – the fastest mammal of this planet that can run at a speed of up to 110 km per hour. This cheetah was a female – female that was full of food. Such full beast has usually only one plan – come to some shade and relax. Well, we did not want to disturb more… 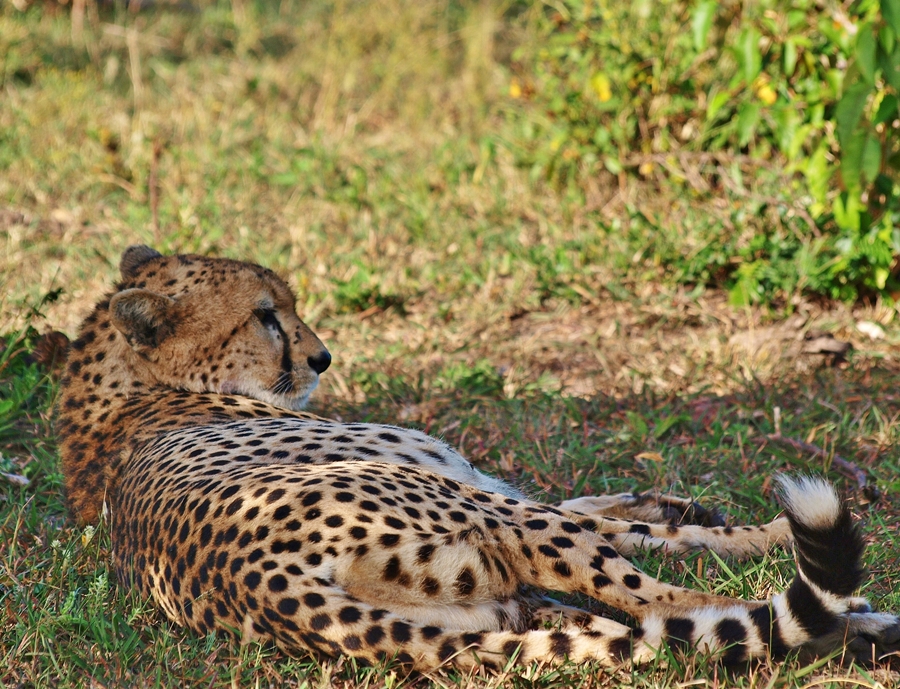 Other nice surprises were waiting for us about two minutes from the Masai village – the tallest animals in the world, more than five meters tall Masai giraffes. You can not find taller ladies on the savanna. 🙂

We always spend at least one hour with local Masais. Everyone must pay 30$ for looking to their humble privacy. Masai dances and singing are included in the price. Well, not only cows and goats already make their daily bread/ livelihood here.

We were jumping with Masai warriors (their typical dance, just for men) which were dressed in their typical checkered garments. One local citizen, who knows English, showed us where is their cattle behind the natural barbed fence and explained who does what and what habits are typical for Masais. (Details, photos, and videos from the life of Masais maybe later in another blog that will be dedicated just to Masais.) The local villager, who was as our local guide, praised himself how he once killed the African buffalo, so he is a real Masai warrior. „Buffalo is more dangerous than a lion,“ he emphasized his heroic act. We looked into their modest, small houses that were built from cow dung. Local villagers offered us again that we can sleep in their homes next time and not in some tourist resorst. (Who would be interested about it, just let to your travel company/guide know, but I do not recommend it for people suffering from claustrophobia.) Of course, such a trip to the village can not be without the offer of souvenirs that were made for us by local Masai women.

Although these Masais are a little defaced because of tourism, I always love to see them. Their talking about their tribe is really interesting and a nice experience. This people are as an integral part of Masai Mara.

We went from the village to the Mara River. You probably know documentary images/videos of hundreds of thousands of animals (a few millions together), mostly of wildebeests, that migrate from the neighboring Serengeti National Park (Tanzania) across this river that is full of crocodiles. We were in the place where this magnificent natural story is happing every year. We were on the banks of the Mara River, where the biggest land animal migration is coming… and will be here in less than a month (in June).

Predators will again have a delicious dinner in bloody spa. Crocodile meeting will be in the river. Lions, leopards, hyenas and everything else will wait on the banks. Because of this moment the Mara River has the nickname „The Blood River.“ We saw only one crocodile in our time. He ate a snake. And dozens of hippoes relaxed on the other side of the river – this territorial fat kills about 500 people per year! It is several times more than lions. Hippo is clearly the most dangerous mammal in Africa! (Probably just human is „better.“) 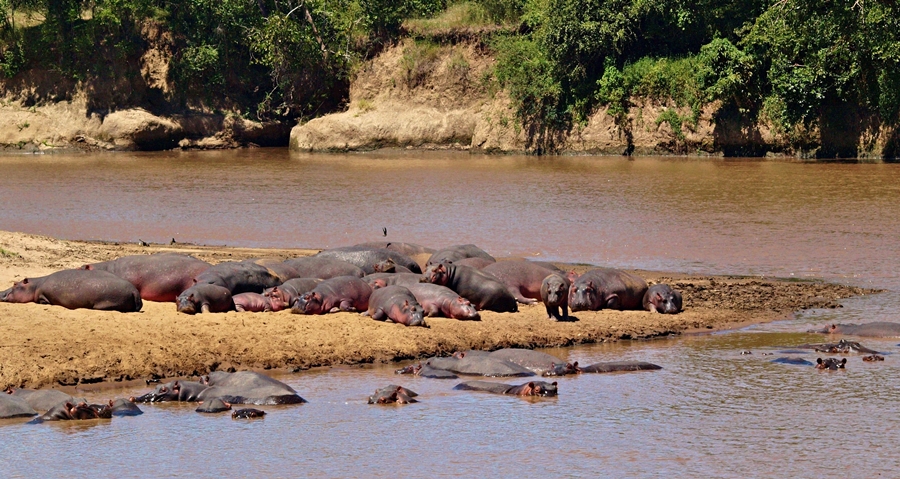 After a lunch picnic by the river and just a few meters from the Kenyan-Tanzanian border (green monkeys again had a taste for our food and one of them sat at the wheel of our car), we continued to look for what Masai Mara could offer yet. We drove without stopping for almost one hour. Occasionally we have seen some of the well-known antelope but that’s all.

Have we exhausted our great luck for this safari? Well, we can not see a cheetah or a lion dinner near every tree. „This is not a zoo,“ I often say this sentence to people when they ask me: „Will we see lions? Leopard? Big African Five?“ When you go into the forest, do you know that you will see a bear, a wolf or a lynx?

The morale of the crew dropped in the car when suddenly… „Hyena, there at the ninth!“ The hyena looked at those strangers who came to see her. Of course, it looked with her very typical smile at us. It was not shy. I rather had the impression that this animal really enjoyed our photography. I think that the rest of it’s family was very close. If someone can expel the lions from eating – from a lion food, so these smiling ladies. Yes, I’m still writing about hyenas.

We stopped the car again in about 15 minutes. We were interested in a orange-brown mane that stood out of high grass. It was beautiful male lion who guarded his prey – the African buffalo, or it is better to say: already just the remnants of the buffalo. 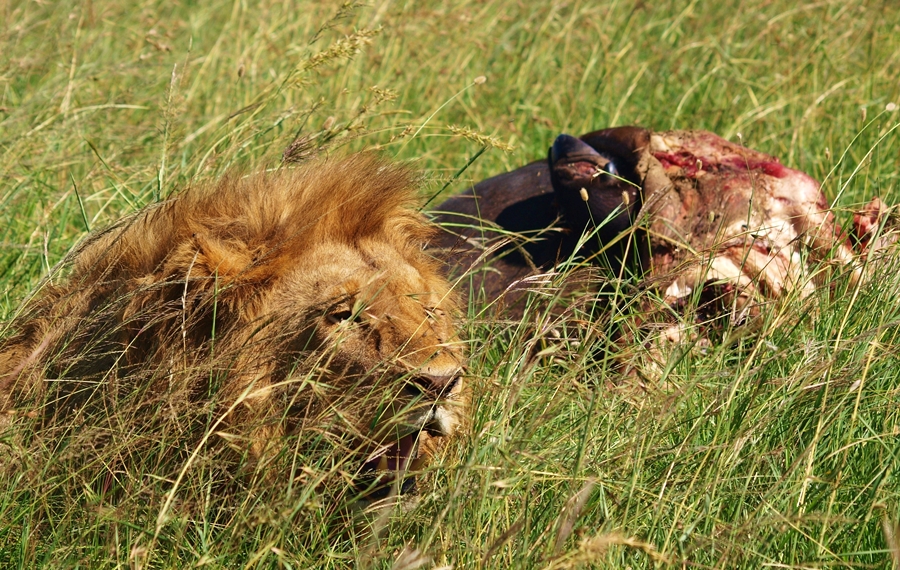 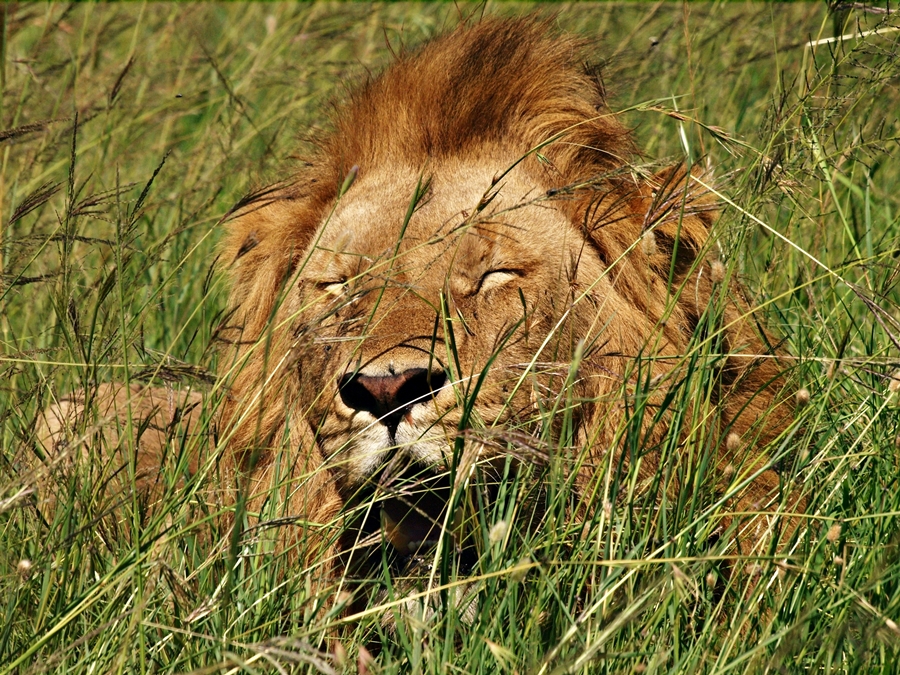 I knew the the lion could not be alone there. „Such African buffalo is too strong rival just for one lion,“ I said it to the people. At that moment, other heads got up under one tree about 40 meters from us – the rest of the group. We came closer to them and saw other three large male

lions who relaxed with the ladies part of this group. So four male lion brothers together! That’s a really great power! It is quite usual have two leaders – two brothers in one group. Even, I heard about three, but four!? „I’ve been working here for 15 years and once I’ve seen three brothers, but four never,“ said me local guide Joseph, who was with us there. The half-eaten buffalo was no problem for this four brothers. They did not have to worry about the remainder of the buffato that still remained. Although, I mentioned that hyenas are able to steal lion food, certainly not to this brotherhood! Even a vulture, that was waiting on the tree, had to wait a long time for a opportunity – that is why the one brother guarded the rest of the buffalo there.

If the lion is the king of the animals, so this strong brotherhood – brothers are currently kings of the kings! This is clearly the most powerful lion group in the entire Masai Mara! Real rulers of Masai Mara!

After more than half hour of observation of this brothers, we decided to continue on our way but we got a defect and not so far from lion brothers. You should not get out of the car on safari, but try to explain it to your car! While some were working on the defect, others watched the surroundings like meerkats. „Something is coming?“ „No, no, just continue to work guys!“ 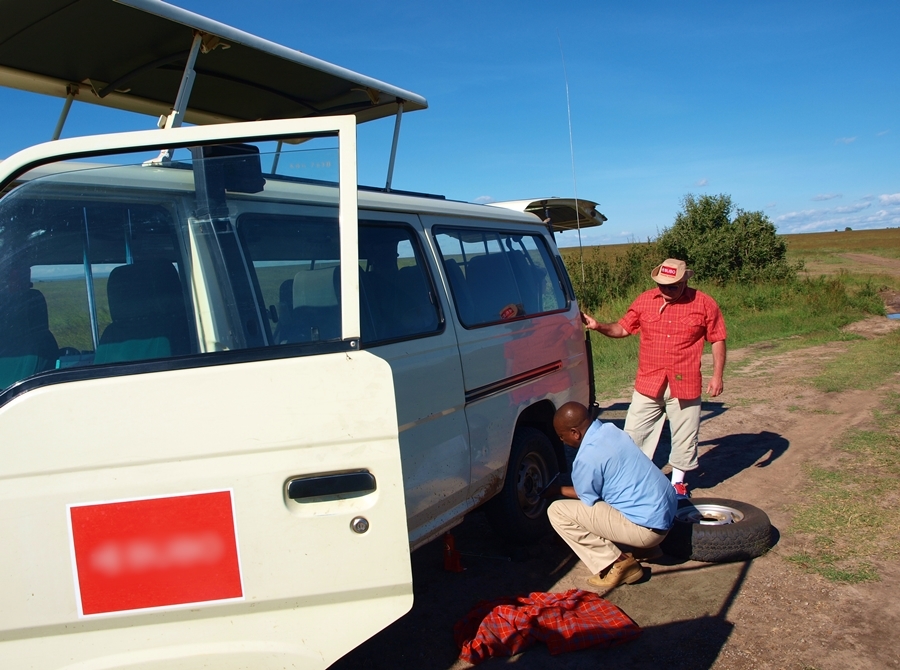 No approaching problem, the wheel was quickly changed, no one was eaten, so we could continue. 🙂

We enjoyed other memorable sceneries of Masai Mara and as a bonus – the Masai giraffes: 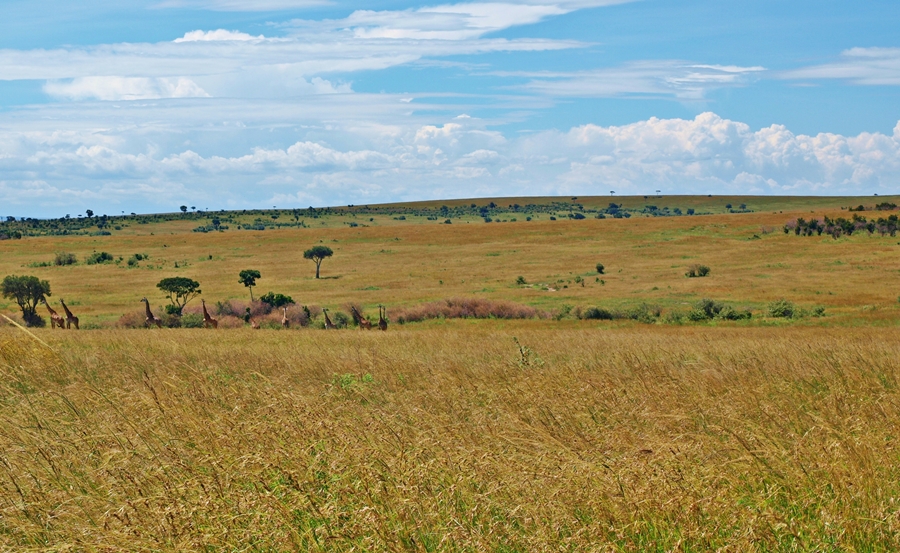 We saw other herds of antelopes and zebras that grazed the grass and I also saw three ostriches that went on the nearest hill. So, after „a good male lion“ another dream come true from breakfast? We went with our car on the hill too, but those ostrichs were not there. Some clients even began to convince me that I didn’t see ostriches and that just seemed to me. Certainly… I still know to recognize the biggest bird of this world! (The ostrich can weigh over 100kg. That’s is a really big chicken.)

„Aaa, they are here…!“ It was one male (with black feathers and pink legs and neck) with two females: 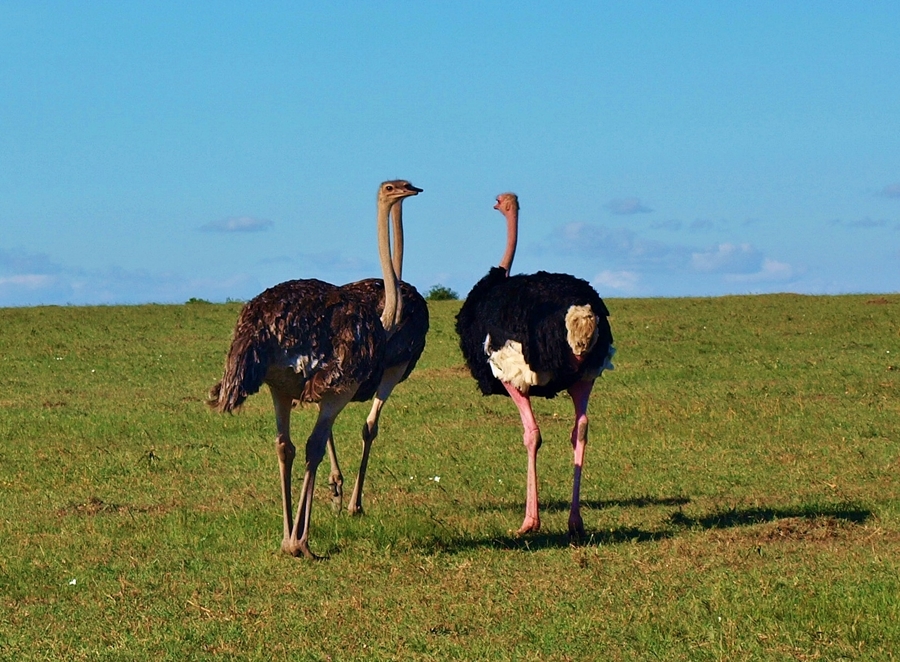 The other morning mission was fulfilled. We had more or less one hour until sunshine. It was time to slowly go to the our safari accomodation. We went between other herds of plains zebras, wildebeests, gazelles, impalas and topis.

Common warthogs were sometimes wandering around these herds. Aforementioned common elands (the second largest antelopes of the world) came with the sunset too. (The largest antelope of the world is their relatives and also live in Africa.) Even other ostriches welcomed us as a dot of the end of the day in front of our accomodation. The last night in the Masai Mara National Park was in front of us… 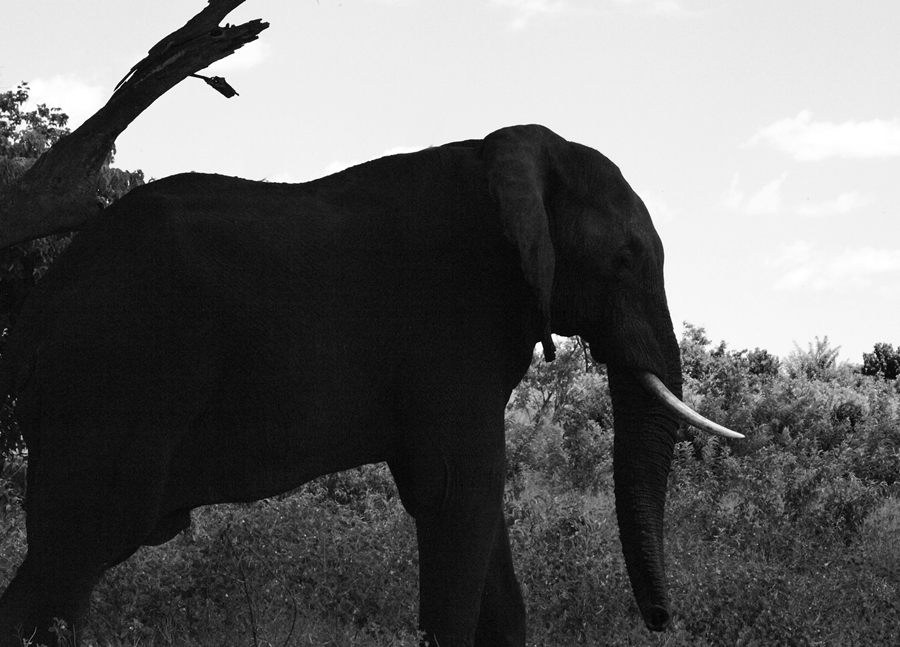 The next day, we went north to Lake Nakuru, where we wanted to see local water birds – pink flamingos, pelicans, drying cormorants, herons, fish eagles, but also rhinoceroses (white and black) living on the shores of this lake, and last but not least – the leopard that is part of the Big African Five and still our last missing member. We believed that if we will have same lucky as in Masai Mara, it would not be a problem. Or as locals say: HAKUNA MATATA 🙂 (in Swahili language: „no worries,“ „no problem“).

I used a few of my photos from other national parks in this article.